The Beveren Civic Center is located on the central artery in the heart of the City of Beveren, twenty minutes west of Antwerp. The project is the new central municipal administration building containing all city hall departments, public service administration, and the police headquarters. The police station and city hall departments are each housed on one leg of an L-shaped building. At the junction of both is an entry volume, which contains the representative functions of the civic center: assembly hall, public auditorium, and public “service market”. The entry façade opens onto and helps define a new civic square. The strategic positioning of the building resulted in a compact L-shaped building. 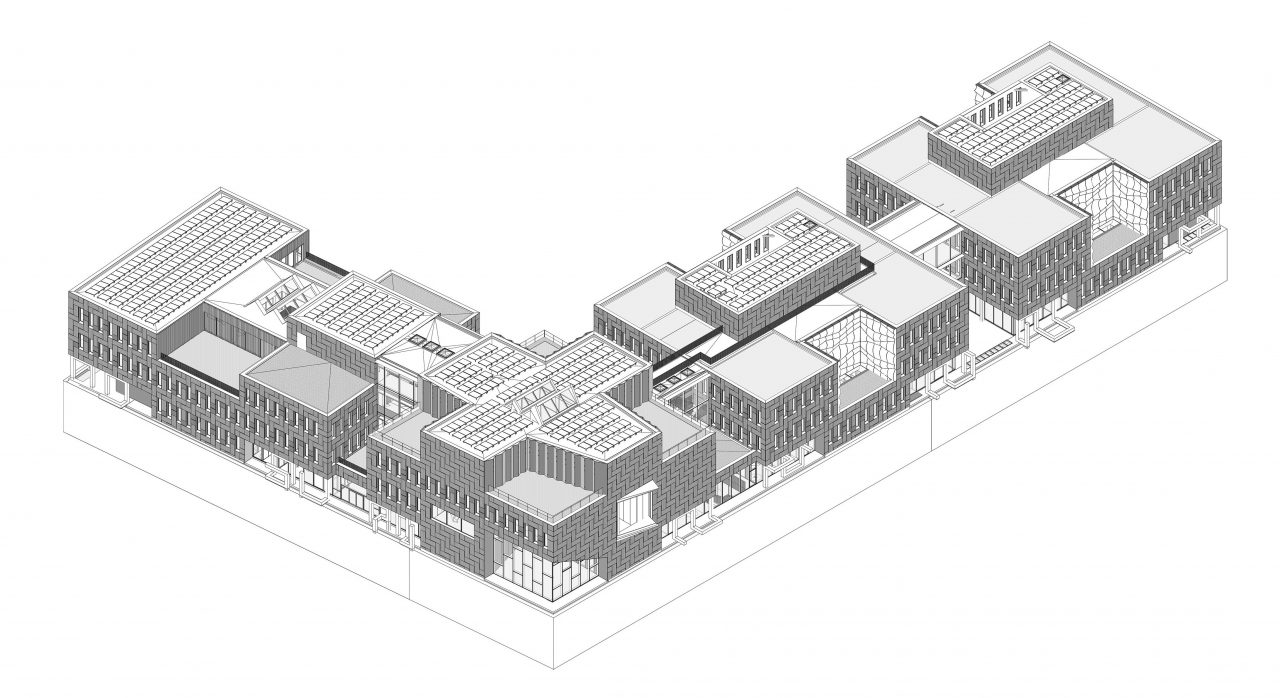 A compact L-shaped building footprint with deep floor plates, and large spans to allow for flexible plan arrangements - The massive building is broken down into four distinct volumes to fit the scale of the urban context, and to ensure all interior spaces have access to light and view

The building is a low-energy building, nearly carbon neutral. Much of the energy savings come from passive solar, wind, and water strategies; as well as active heating, cooling, and energy technologies such as borehole thermal energy storage, chilled ceiling systems for low-temperature heating and cooling, solar panels on the roof, and integrated solar cells in the glazed parking canopies. The Mesh-wall is a façade prototype for a solar shade. The prototype was designed for the Beveren Civic Center courtyards. The prototype’s intelligence is to combine functional requirements: limit solar energy and water exposure, while at the same time allow diffuse light to enter the building interior and permit views to the outside.

The uniqueness of the mesh-wall shape is the product of analog and digital design techniques. A computer solar study was performed on the courtyards, isolating critical solar movements and energy parameters. These variables were noted, and then many formal solutions were explored in clay using ceramic tools. The most promising clay models were 3d scanned, imported into modeling software, and geometrically refined and broken into construction units. The models were inserted into a building information model (BIM) and again analyzed to ensure functional performance and integration with the building as a whole. Design specifications were sent to a steel fabricator and structural engineer. Full-scale mock-ups were built to check and perfect material size assumptions, and study construction and installation techniques.

Stretched metal panels are partly bent to shape before fully formed and welded to structural steel plate profiles. The pre-fabricated mesh walls are then bolted to steel brackets pre-cast into the concrete floor slabs. Concave shapes are used at the Southern courtyards, sized to block critical solar angles. The form, originally inspired by a fabric curtain oriented horizontally, forces light to pass through each panel undulation more than once, thereby minimizing direct heat gain. Convex shapes are used at the Northern courtyards to create a shadow effect even without direct sunlight. Steel is economically utilized by cutting convex and concave shapes out of one typically dimensioned metal sheet. The necessery columns along the facade were also conceved as architectural elements. Reinterpreted columns bend and fold, serving as benches, letterboxes, and ticket column. The shapes refere to works of art by visual artists Sol LeWitt. A brick mantle covers the entire building. The red brick is selected to match the character of the buildings in the area. From the distance, you can see that another material has been mixed with brick, a blue limestone. As one draws nearer to the building, the direction of the bricks and the size of the bluestone, together with the window grid, form a pattern of movement.