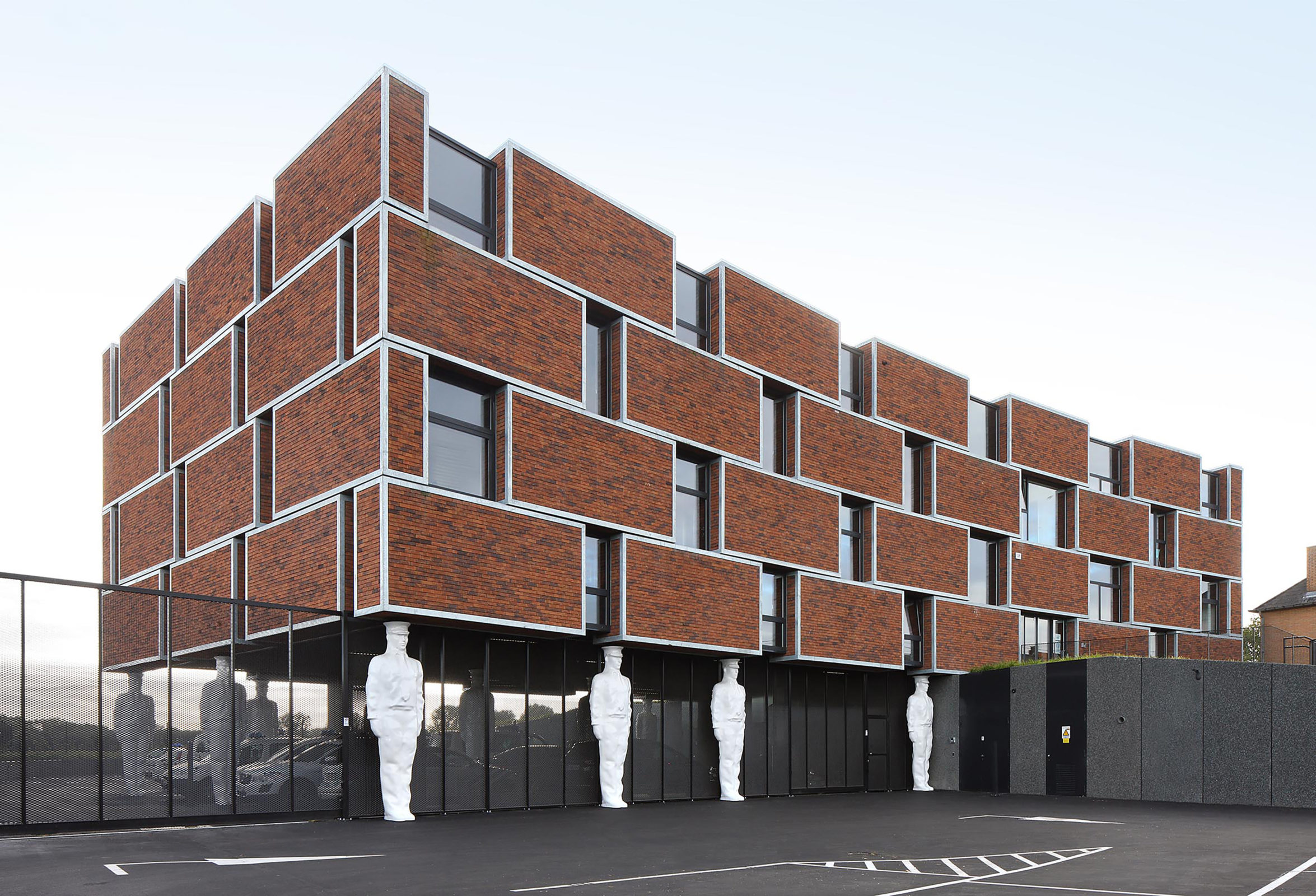 The Brakel Police Station is the police headquarters for the towns of Brakel, Horebeke, Maarkedal, and Zwalm, a largely agricultural region in the so-called Flemish Ardennes. The building provides offices, training rooms, and gathering facilities for 50 police officers, 2 detainment cells, and parking spaces for 25 security vehicles. By positioning the building carefully on the site, new outdoor spaces for private and public use were created including parking and logistics under the building structure, a topographic landscape entry plaza, and an exterior stone patio.

The structure meets the ground above a ‘green’ public space. An S-curved ramp contributes to the sculptural topography that denotes the principal entrance to the facility. The Megabricks cantilever beyond this artificial landscape is elevated to give framed views to the agricultural landscape beyond. Underneath is security vehicle parking, logistics, and the maximum-security private entry point to the facility.

This modest public facility has many significant architectural features that account for its adoption as a significant landmark for the townspeople and local political establishment. A police station through its strong austere program can express brutality in form. The Elements, Megabricks, and Atlantes add a playful note to the design of antiquity. The Atlantes offer humane forms, in one sense protective or overpowering, but at the same time humorous. The Megabricks form a subtle bend, a welcoming gesture embracing visitors, and a geometry to regulate light and views. From within the building, the concave north façade is ‘closed’ or internal, offering privacy, whereas the convex south façade opens up to the landscape.

In addition to the subtle bend in the façade, the plan is further influenced by a central stairwell, which bisects three-levels of individual offices and shared work areas, and common service spaces. The generous stairwell is a space unto itself, structuring the adjacent spaces but allowing for many views through space and into areas where spontaneous interactions between the officers take place. 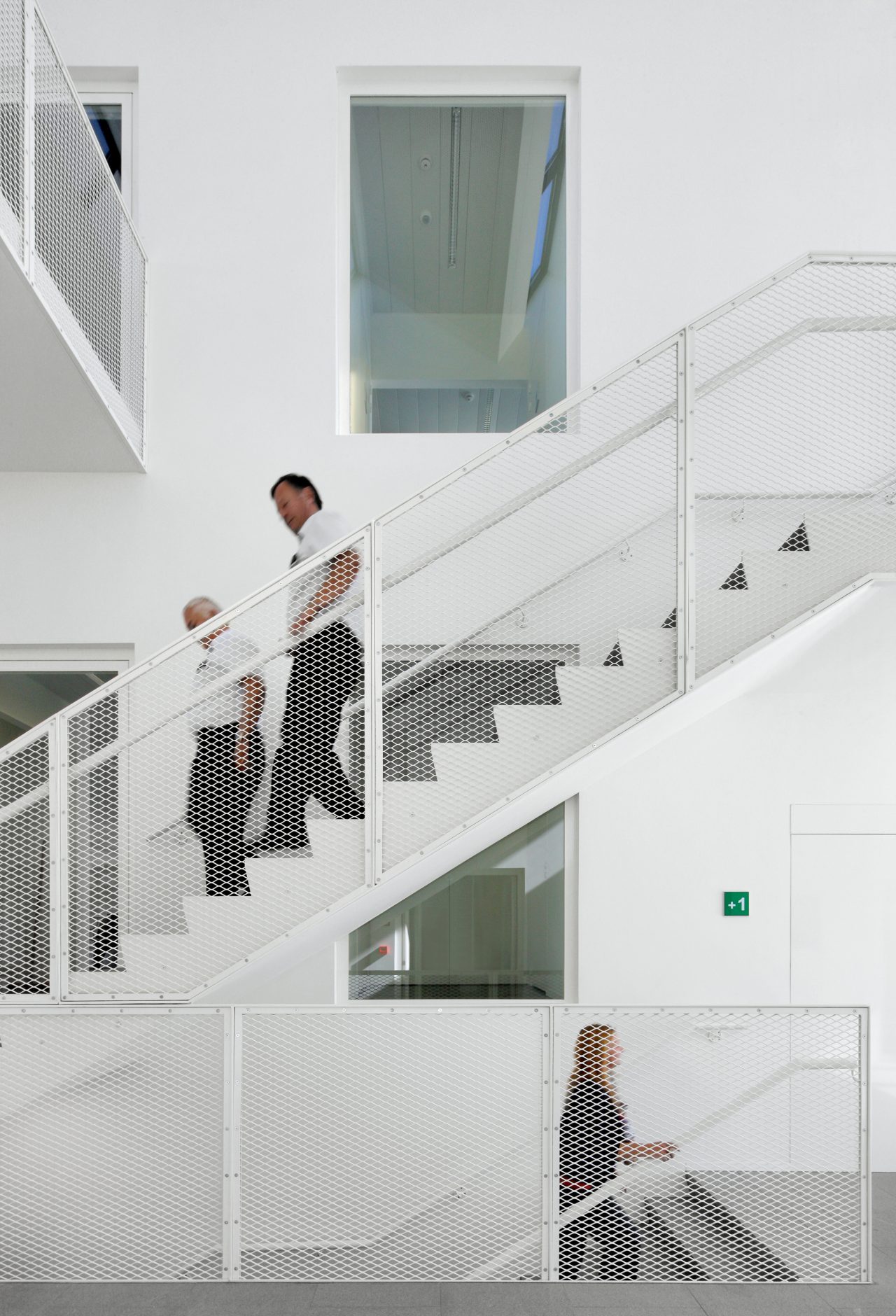 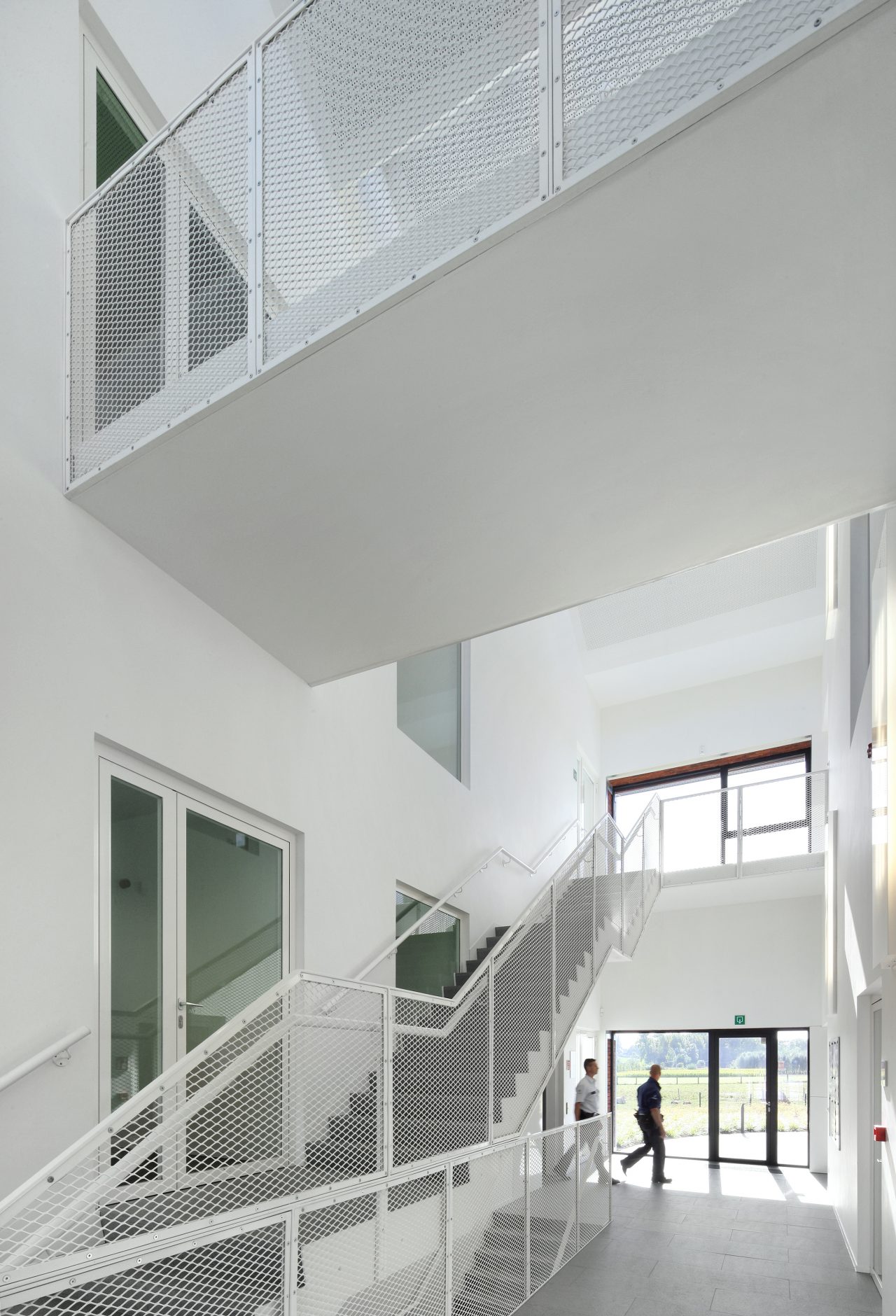 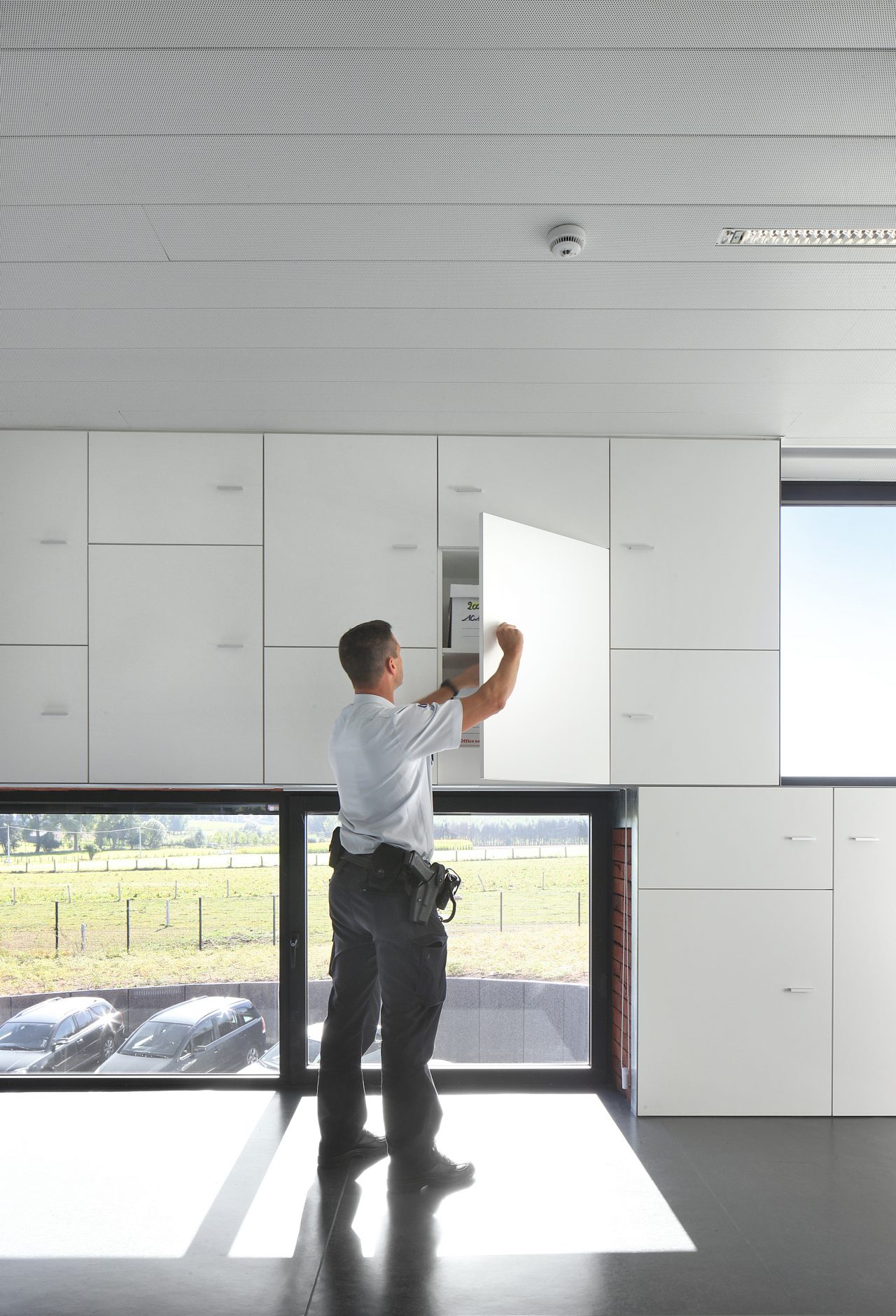 The building is built with large blocks, called Megabricks. They are similar in size to the stone monoliths that were used in the architecture of antiquity. The Megabricks consist of thick sandwich panels made of cladding, insulation, vertical structure, and wall cabinets, fit within steel frames, and brick strips glued onto cement plates. The Megabricks are structurally deceptive (not load-bearing) but utilize precise detailing to give the impression of large blocks. The vertical structure consists of a typical reinforced concrete post and beams construction, hidden in the overlap of two Megabricks.

The Atlantes for the Brakel Police Station are twelve gargantuan statues, measuring nearly 12 ft. (3.6m), scaled 2:1 of a person. They stand effortlessly in the place of each column, giving a noble stature to the facility akin to the ‘Atlantes’ of Renaissance architectural vocabulary or the ‘Caryatids’ of Ancient Greece. Here, at the police station, the figures express a distinctly androgynous being, both supporting the weight of the facility above, regulating the circulation and parking of the patrol cars and service vehicles, and also projecting an institutional pride of the officers and town public.

The station rests on twelve gargantuan statues. They are made of two plastic halves that are gentle, lightweight, and express a distinctly androgynous person. They both support the weight of the facility above and project an institutional dignity of the officers and town public. A police station through its strong austere program can express brutality in form. The Atlantes offer humane forms, in one sense protective or overpowering, but at the same time humorous, playful, and thereby a means to question authority.

The Atlantes are beautiful and dignified objects, anthropomorphic elements continuing a lineage of historical architectural motifs, and a testament to successful collaborations between architects, digital artists, and industrial technicians. The Atlantes, as art objects, have been auctioned independently of the architecture to patrons who are interested in the effects that advanced manufacturing techniques have on the commercial art market.

The Atlantes were digitally fabricated. First, the form materialized via a 3d scan of a human body, then digitally refined to obfuscate any gender bias. The final digital model was then sectioned into planar geometry and CNC routed in medium-density fiberboard (MDF). MDF sheets were glued together and further tooled with drill bits to create a smooth positive mold. The positive mold formed one half of the final column. Each half was then “painted” with layers of polyester to create a negative (final) mold, the pieces that form the final statue. The two halves were fastened together with a seamless glue joint in situ. The hollow Atlantes statues protect 30cm round structural concrete columns and dignify their structural function.