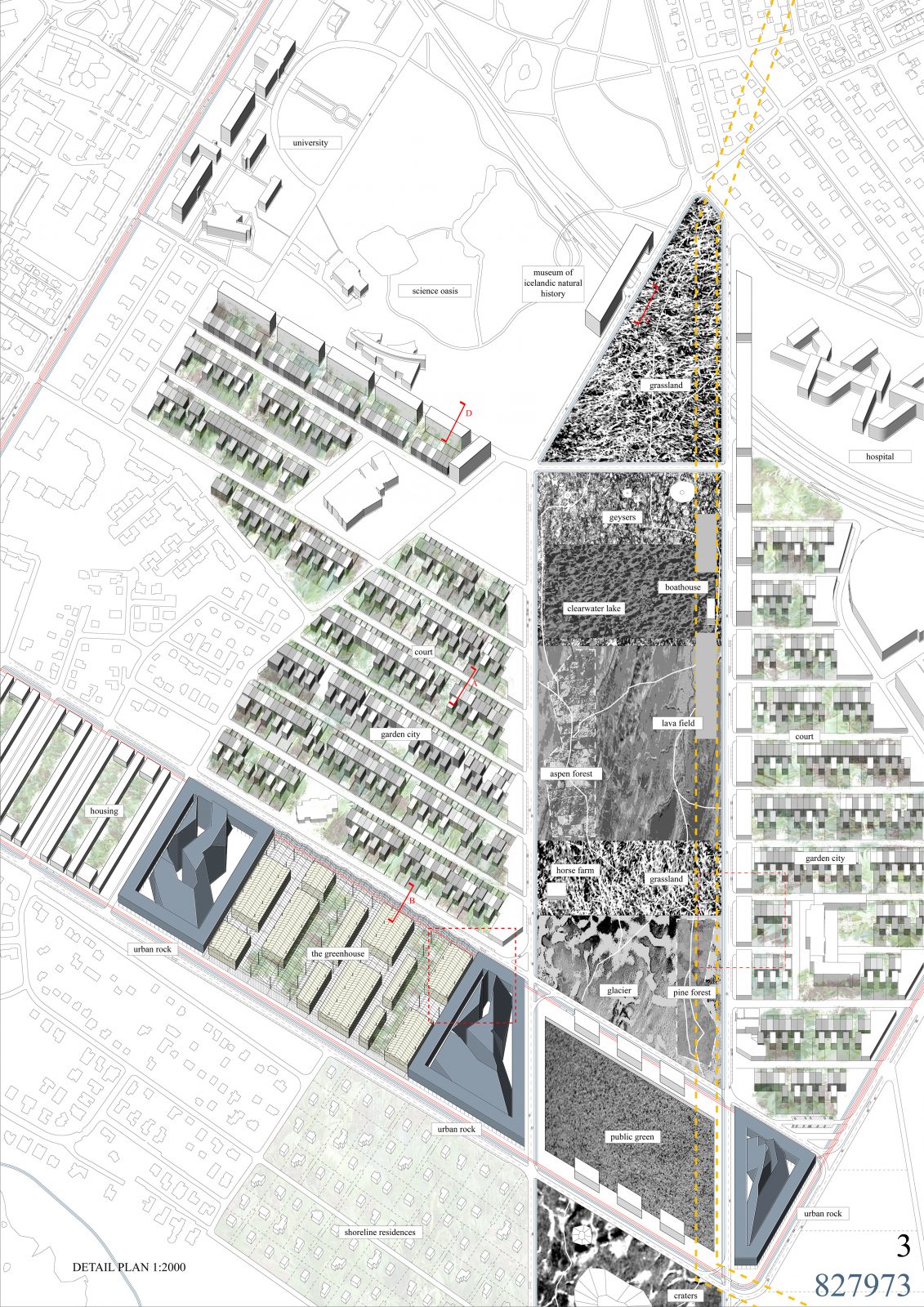 This competition entry for the conversion of the old airport near Reykjavik received 3rd prize. The project succeeded in organizing a large central rectangle connecting the old center of the city, with a new town center organized near one of the runways. A large park, featuring a microcosm of the different geologies and ecosystems of Iceland, would become the center of the expanded city. Residential typologies have been reinvented by focusing on very low sunlight angles, which are a unique feature in the area.

ORG proposed to complement Iceland’s historical center by providing it with a contemporary counterpoint: a new capital Civic Complex with similar dimensions as the old center. A bi-nuclear capital thus appears, spanning a large infrastructural rectangle (the Ferningur) between its two poles, which in its turn contains and compacts the future development of a Garden City. Finally, a large continuous park system connects the northern historic core and its southern, modern counterpoint. On the grounds of the former airport, the park is themed and formally organized to constitute a microcosm of Iceland as a whole. Thus, the project definitions appear: (1) the Civic Core Complex (2) the Ferningur (3) the Garden City, and (4), Iceland Microcosm Park. The historic core and the new Civic Complex have the same dimensions because both are based on a pedestrian walking radius. The Civic Complex enjoys almost uninterrupted views of the southern bay; it becomes the landmark of Iceland’s modernity; its higher elements are strategically placed to minimize shadows cast. The Civic Complex consists of a sequence of bigger urban blocks (85x200m) to contain a variety of programs: residential, offices, hotels, retail, etc. The space between two blocks is wider than a street would require. Here, civic monuments are strategically placed as free-standing buildings. These could include a memorial about the end of the Cold War, a trades building, a community hall, a school, etc. The result is a chain of public squares, each with a different identity granted by each different monument; and the now generous width of the north-south plazas allow sunlight into the blocks, even during wintertime.

The Ferningur is a territorial figure that circumscribes the new, enlarged downtown of Reykjavík. It is the most essential feature of the project. Like the Chicago Loop, it constitutes a tramway rectangle that circumscribes, defines, and makes accessible the downtown area. It constitutes the image of the city and will constitute the central figure not only on tourist maps but also on the mental maps of Reykjavik’s inhabitants. The Garden City consists of two rather dense neighborhoods that almost seamlessly connect to the existing fabrics of the town. Although the aim is that these would be dominantly residential, we have expressly not fixed their land use: like any urban neighborhood, these districts should include retail and professional activities (lawyers, doctors, musicians, small offices, small workshops, etc.) ­ Also, substantial programs of the biotech industry will be integrated here. This fabric has a grain size that is flexible enough to accommodate a host of different programs, and precisely their mixing constitutes the central aim of the project. Iceland Microcosm Park, finally, is a core sample of Iceland’s natural diversity: exposing geological diversity, the various topographies, fauna, and flora in a single, large, generous park. To appreciate the dramatic force of Iceland’s nature, one needs to travel for days if not weeks. Accessing remote areas is still a risky undertaking. To appreciate the breadth of the countryside, the capital will now offer a large park, where the entire territory of Iceland is summarized entertainingly and educationally. As a microcosm, it offers the visitor an abstract and summary of everything this amazing country is about.