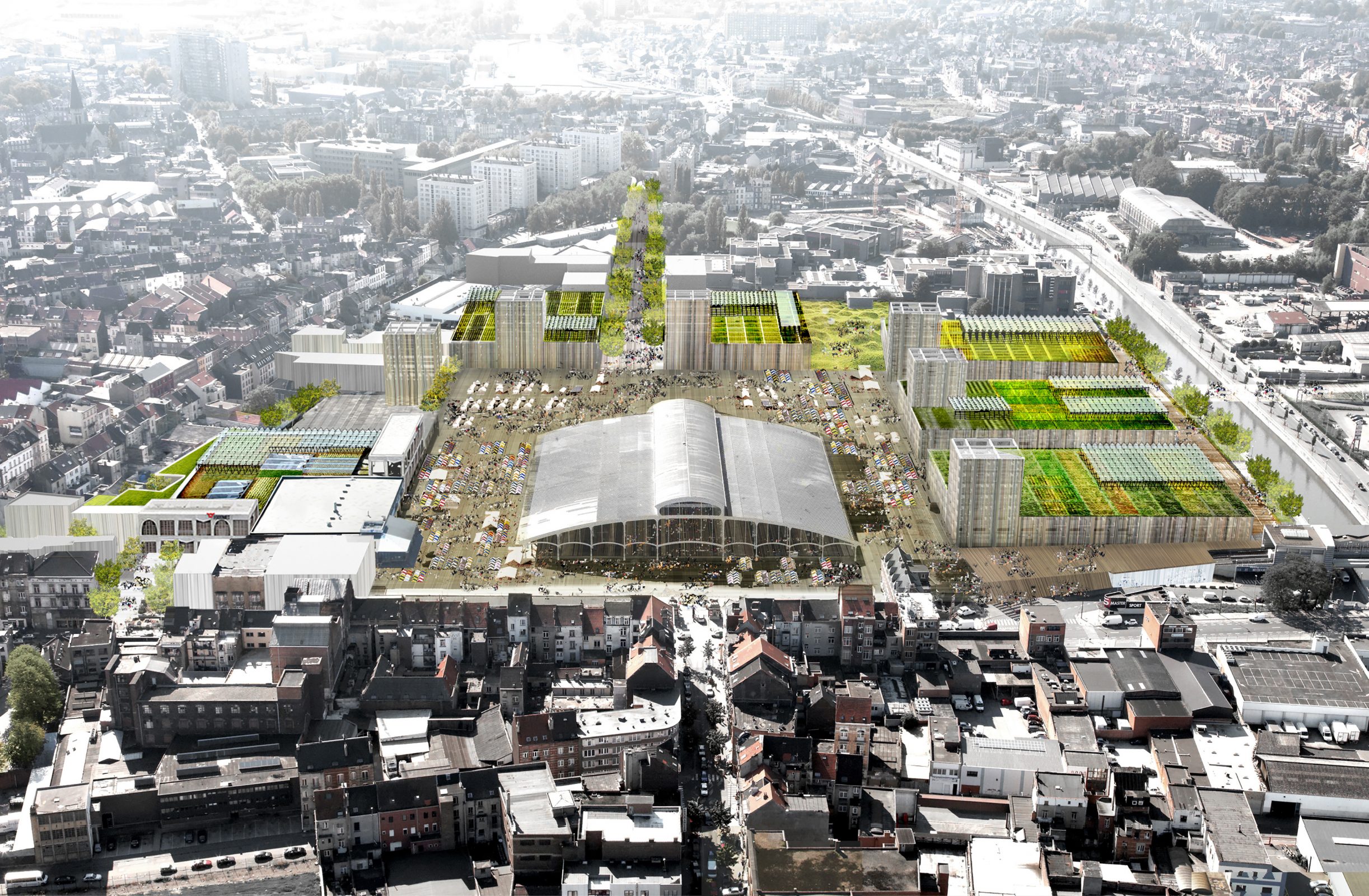 Foodmet with urban farming on rooftops

The Brussels Meat Market District Masterplan develops an urban and architectural scenario for the gradual conversion of an industrial slaughterhouse site into a mixed urban environment. The district is located in the immigrant neighborhood of Anderlecht, Belgium less than 1km (0.6mi) from Brussels South train station.

The district is vibrant but lacks public services and economic opportunities. The slaughterhouse and adjacent open space is a prominent zone for the economic exchange of goods and services. The plan seeks to renew the historical civic importance of the industrial quarter by energizing pre-existing meat market industries, renovating the public plaza, reconnecting hitherto fragmented neighborhoods, and creating additional space for economic opportunities.

Design of physical and visual through connections in the existing fabric will create multiple links between the Abattoir site and the surrounding neighborhoods. In this way, the site will become a productive and well-used focal point. The master plan proposes to create a 60,000 m2 urban space at the center of the site, which can host other socio-cultural events alongside market activities.

Space has a very clear outline. The new plan defines its borders by a typology of urban warehouses, open-ended containers, buildings that have a clear urban form, but no predefined content. The warehouse form and type, not just end-use and program, are essential to defining the spatial condition of the square and encourage investment and occupation. The warehouse form is compact with various strategies for light and air, and with the addition of tower elements, which can be seen from far away and further strengthen their form and demarcation of the public zone.

Professional urban planners, designers, technology, and financial experts from ORG have been guiding and advising the district redevelopment for more than 8 years. While designing the plan, we also guided neighborhood and city outreach and consensus building; created a ‘quality chamber’ to review the ongoing work and submit it to critiques of key civic stakeholders; did the economic modeling; applied and found grants to support capital improvements; and developed a sequence of pilot projects, where each investment triggered the opening up of a site somewhere else, thus allowing for a domino-effect of implementation. The first market building was completed in June 2015, with building 2 under selection.

Smart market tiles are pressure sensitive tiles connected to a software application. The flexible use space is heavily used, smart tiles can designate areas for given functions such as parking, temporary events or market stalls. Within any given designation, an area can be reserved with an app. LED lights communicate whether a spot is reserved or available for optimized use of space.